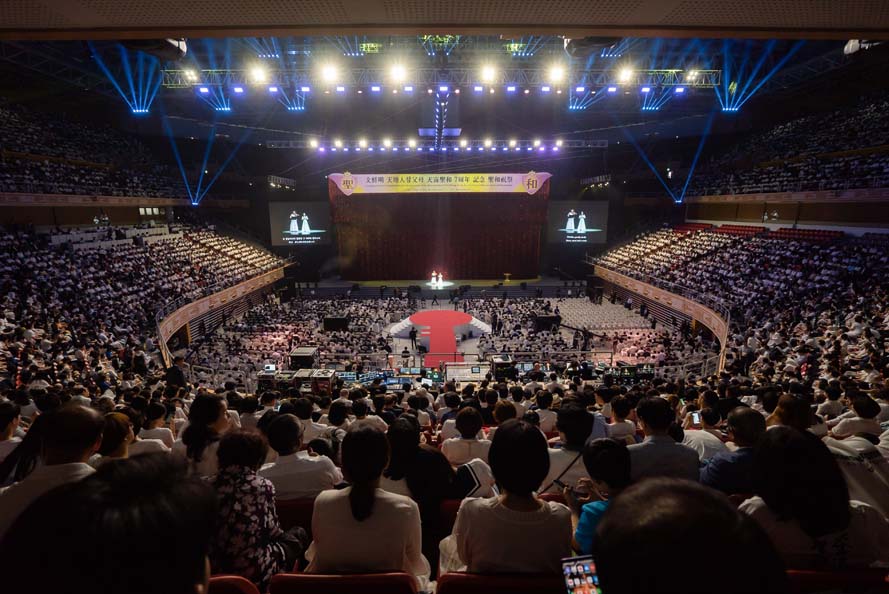 For the commemoration, people from all over the world who love and miss True Father came. Political, economic and religious leaders from Korea and abroad were among them. All together around 30,000 people gathered.

Part 1: Main Event
With performances by Seiko Lee and Hyojeong Cultural Foundation, which opened the first part of the ceremony, the venue was filled with a flurry of memorial heat, International President Sun-jin Moon recited a sublime poem during the Seonghwa Commemoration : “Like the light of day, you never fail to rise and shine forth with true love, pure light, profound wisdom and exceptional beauty.”
Wonju Jeong McDevitt, chief of True Mother’s Secretariat, read aloud a letter that True Mother had written to True Father. Then, the Memorial Address was given by Goodluck Jonathan, former President of Nigeria who introduced himself as a blessed family promising to work together with True Parents.

Part 2: Hyojeong Cultural Festival
The Hyojeong Cultural Festival infused grace into the second part of the celebration. The themes of the songs were “Suffering” and “Victory.” The well-known singer Paul Potts sang with Cheon Il Guk representative Seiko Lee. The Hyojeong Cultural event continued with The Little Angels of Korea who gave a very touching performance.
Shin-jin Moon, who is grandson of True Mother, read a letter he’d written to encourage the participants and increase their determination : “True Father loved us all like our own parent. So, I think that is why he could make us one family. I believe that we can make it. I wish everyone the best in all your efforts!” International President Sun-jin Moon, and her husband, opened the Hyojeong Festival of sharing True Parents' Favorite Dishes.