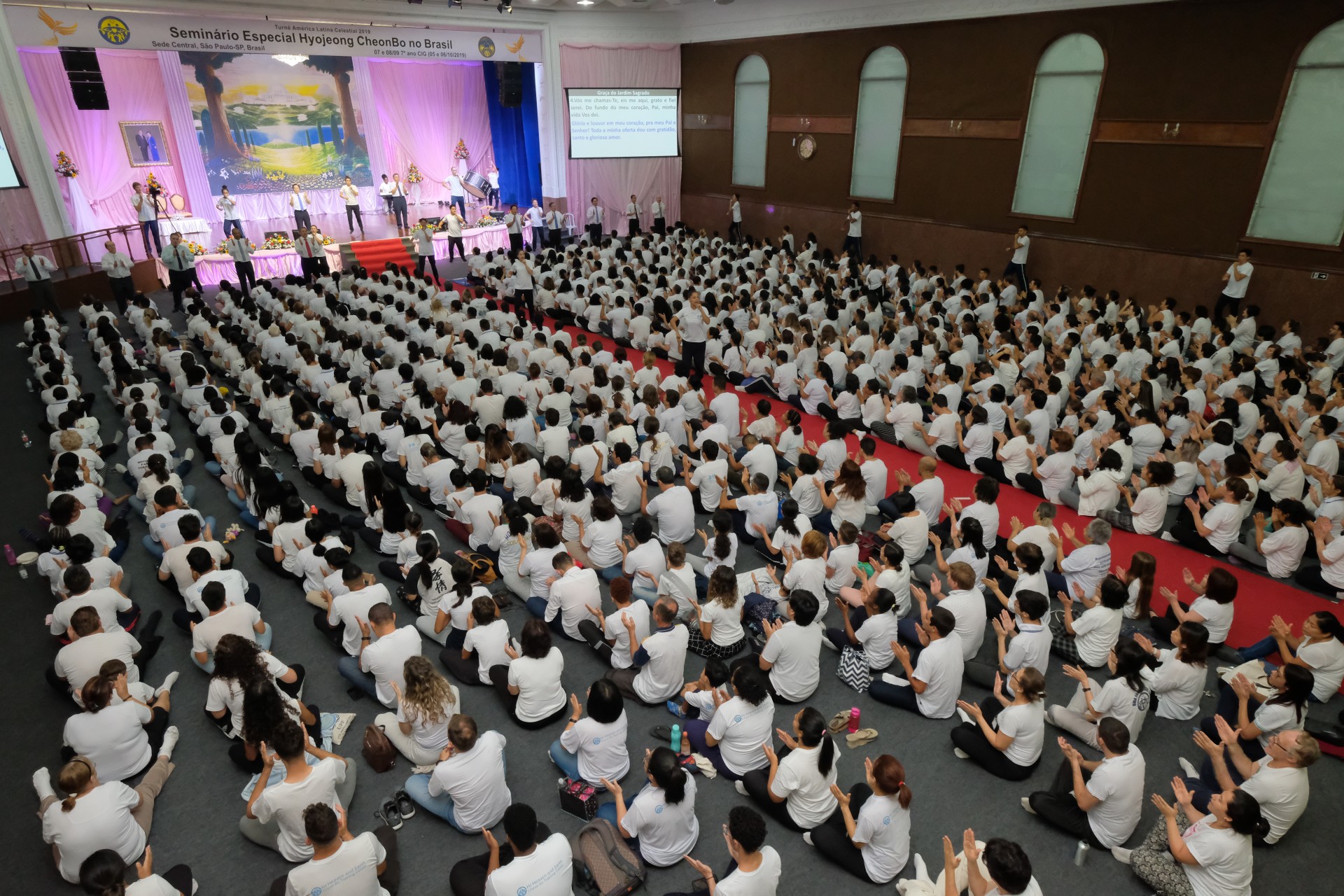 From August to October, all four regional Branch Training Centers held Hyojeong CheonBo Special Events and numerous workshops. There have also been Overseas Tours and Special Events by the Japan Region Tour Teams, who rapidly increased the number of events in all Districts in Japan, with very positive results. Here is some more detailed information and testimonies about those events.

In September, the Heavenly Europe and Middle East Branch Training Center held a Middle East 3-day Hyojeong Youth Workshop with a total of 36 participants, including staff from Pakistan, Iran, Lebanon, Israel and Turkey, to educate the 2nd generation members with guidance about their life of faith and the CheonBo Providence. The Branch Training Center President also visited Israel, Hungary and Portugal to prepare for Hyojeong CheonBo Special Events which are being planned in the upcoming months.
On October 5–6, a successful Hyojeong CheonBo Spain Special Event was held in Madrid, the capital city of Spain, with a total of 212 participants.
One participant shared about a spiritual experience he had during the Spain event: “When I was praying, I was visited by True Father and Jesus. True Father appeared three times and Jesus appeared twice, and the visits of both of them were very quick and they looked like they were very busy. I also had a very long conversation with the spirits for whom I did collateral liberations this time, but I did not see them; these were only mental conversations. In general, I felt deeply touched by the absolute energy we received from our lecturer brothers and by all the hands that touched my body. I offer all my gratitude and love to Heavenly Parent and True Parents for bringing to us to restoration.”

On August 3-4, a Hyojeong CheonBo Kenya Special Event was held in Nairobi, the capital city of Kenya, with 450 participants. This was followed on September 14-15 by a Hyojeong CheonBo Mali Special Event in Bamako, the capital city of Mali, with 233 participants. In addition, the Heavenly Africa Branch Training Center staff members supported the São Tomé and Principe Blessing Ceremony in early September, volunteering with the medical support team.
On October 5 and 6, a Hyojeong CheonBo Zambia Special Event was held in Lusaka, the capital city of Zambia, with 270 participants. On October 12 and 13, the Hyojeong CheonBo Benin Special Event was held in Cotonou City, with 476 participants.
Mr. C.M. (September 7, 2017 Blessing, 20s), who participated in the Zambia event, shared his testimony of receiving a letter from one of his ancestors: “During the Changyang Yeoksa and the Ancestor Liberation Ceremony, I had an experience which I could not understand for some time. When I was clapping, I received a letter from my grandfather which contained a lot of information. It said, ‘My Dear Grandson, I am so grateful for the support, care, effort and love which you have invested for us. We are very sorry for the burdens that we left behind after we departed the earth. Please keep moving, and we will support you wherever you go.’”

The HJ Heaven and Earth CheonBo Training Center staff made several tours in Japan from August to October, featuring Hyojeong Offering Presentation Ceremonies. During August, three Ceremonies were held in Gifu, Wakayama, and Shiga, with a total of 4,398 participants. In September, three more Ceremonies were completed in Tottori, Fukushima, and Miyagi, with 8,080 participants, and during October, three addition Ceremonies were completed in the Aichi, Saga, and Kumamoto, with 42,417 participants.
On August 25, Training Center Vice President Myong-kwan Lee, and other staff members went to Mount Koya under the guidance of Wakayama District Director. Koya Mountain is a sacred place for Japanese Buddhists founded by Kobo, a Buddhist saint, in the early Heian period of Japan (794-1192). They offered sincere prayers for the success of the Wakayama event, entreating the good Buddhist spirits to cooperate with them so that amazing heavenly works would take place in Wakayama. The following day, on August 26, a splendid 2019 Wakayama Hyojeong Offering Ceremony for the Inheritance of Heavenly Fortune was held in Wakayama District in Region 4 of Japan, with 1,965 participants. After Vice President Myong-kwan Lee finished his lecture, he explained, “Now this place is being connected to the HJ Heaven and Earth CheonBo Training Center.” Right after his message, the spiritual atmosphere was rapidly elevated.
One participant at this event, Ms. J.O. (30,000 Couples, 50s), who came from Wakayama District, shared a testimony of hearing True Father’s voice saying to bring more light to brighten the country of Japan: “Earlier that morning, Kobo, a Buddhist saint, had sent a message saying, ‘We are very grateful. We will never be able to repay what you have done for us.’ Thinking of this, I realized that today’s event was one of the miraculous works in this era of True Mother who has the legend of a Maitreya connected to her ancestor Han-joon Cho in her background. As the drums rang out and sound of clapping for chanyang grew louder, I felt the spirit of the HJ Heaven and Earth CheonBo Training Center enveloping the venue. I also heard a loud voice and laugh that resonated throughout the hall saying, ‘That’s good. The Maitreya’s promise has been fulfilled,’ followed by joyful laughter. During the chanyang session, while I was on the second floor working hard to remove the evil spirits attached to my body, I looked down at the first floor. When I asked, ‘True Father, are you here?’ I heard his voice answering, ‘When the light is strong, the darkness becomes smaller. Bring more light to brighten the country of Japan.’”
On Oct. 6, Japanese Workshop Department Director Beom-seok Lee, and Japanese Workshop Team Leader Toshiaki Yokoi traveled to Japan for the Hyojeong Culture Blessing Festival: Rally for the Hopeful March Forward of Heavenly Japan Region 3, which was held in attendance to True Parents in Tokoname City in Aichi Prefecture. Director Lee and Team Leader Yokoi offered their support to deliver the grace of chanyang to about 40,000 people during the Chanyang Yeoksa portion of the event, which was held at 12:45 p.m. for half an hour.
Mizuguchi Seiichi, the leader of Fudomyo-o (不動明王), which is a religious group in the area, attended this Nagoya event and he became convinced that the savior has come to Korea. “I saw the evil spirits disappearing during the event and the absolute good spirits embracing the entire hall. Then I felt sure that God had sent the savior to Korea. I saw a brilliant huge light when I looked at Mrs. Hak Ja Han Moon. I saw a massive wave of all the religions harmoniously flowing into the arms of Mrs. Hak Ja Han Moon. Gathering 40,000 people is not an easy thing to do. I felt great joy deep in my heart.”
Also on October 26 and 27, a Hyojeong Culture and True Love Family Blessing Festival is planned for Taipei City, Taiwan, and latest reports from Taiwan as we go to press indicate that about 1,500 participants are expected (According to the current information by October 22).

​
Japanese Region Tour Teams: Hyojeong Substantial Holy Spirit Special Events with the Grace of Heavenly Works
To strengthen the Japanese Region Tours, the HJ Heaven and Earth CheonBo Training Center held a training workshop for supervisors from each District in Japan. A total of 61 people completed this 21-day special workshop, and they are now actively working to support the local events being held in Japan. From August to October, there will have been 303 events with a total of about 75,497 participants expected. (According to the current information by October 22)
One woman (30,000 Couples) who attended the Wakayama North Hyojeong Offering Presentation Ceremony for the Inheritance of Heavenly Fortune (August 2) shared her testimony of meeting True Parents at the venue: “When the chanyang session started, True Father and True Mother came. As they looked at the faces of all of the participants, they said, ‘2020 will come soon, but we are still waiting with our arms open wide, waiting for the children who are not able to leap forward yet. We have been anxiously waiting for them, but they have been very entangled with their struggles and hampered by their short-sightedness, so they rarely come to see us. We couldn’t wait any longer, so we came to meet you.’ Jesus was there as well. When we heard a lecture on the history of restoration about accepting True Mother, Jesus cried out, ‘Oh! Finally my resentment has been solved.’ I was surprised to think that our True Mother is also Jesus’ True Mother. About ten minutes after the start of the chanyang session, my body suddenly lightened as I felt the evil spirits that had been attached to me rapidly removed.”

USA Tour: Hyojeong CheonBo New York Special Event
On October 5 and 6, a Hyojeong CheonBo New York Special Event was held at the Belvedere Family Church  with about 1,500 participants. International Workshop Team Leader Ryuichi Kishimoto and supervisor assistant Michimasa Nakatsuji were dispatched in advance to the United States to prepare for the CheonBo event. They departed from Incheon Airport in the morning on October 2. International Workshop Department Director In-seong Moon followed them two days later on October 4.
The ancestor blessing up to generations 430 started in the United States with the Hyojeong CheonBo New York Special Event. This amazing works brought strong passion and spiritual power to awaken the members in the United States with a great fire of revival.
Southwest Region Director Rev. John Jackson, who attended this event, shared his testimony of hearing True Mother’s voice during the chanyang session: “During the chanyang session, I had a strong emotional reaction to one particular person, a sister I had never met before. I realized this woman had gone through many difficult experiences. I could literally hear True Mother saying, ‘This child has suffered very much and I want to love her through you.’
Another participant, Women’s Federation for World Peace USA President Angelika Selle, shared her testimony of hearing the voice of a spirit during the Ancestor Liberation Ceremony: “Today, when we did the liberation, I heard a voice saying, ‘You have no idea how long we have been waiting for this.’ I heard that over and over.”