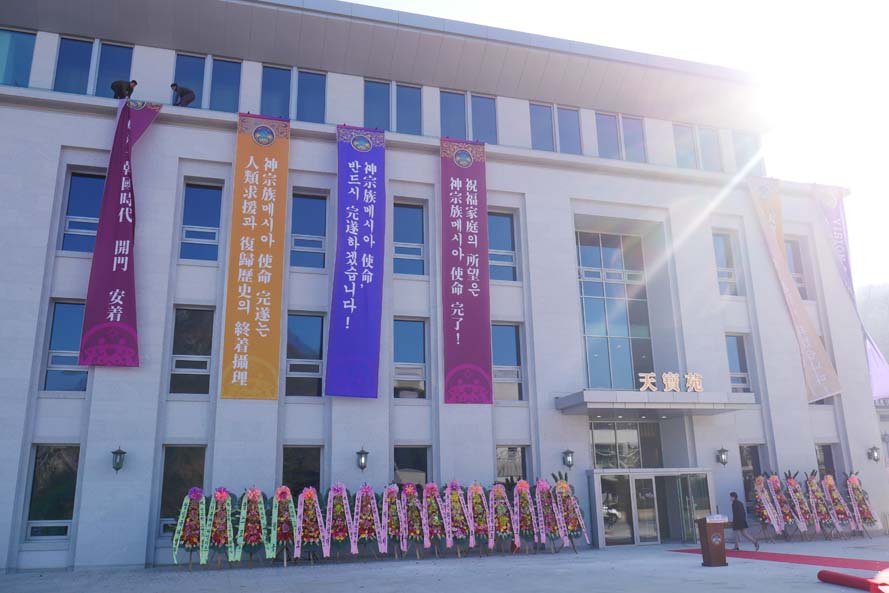 Ⅵ. HJ Heaven and Earth CheonBo Training Center Opening the CheonBo Era
True Parents bestowed a new name “HJ Heaven and Earth CheonBo Training Center” for the “Cheongpyeong Heaven and Earth Training Center” during the closing ceremony of the 2019 Cheon Il Guk Leaders Assembly, which was held at Cheonseong Wanglim Palace on Feb. 15, 2019 (1.11 by the heavenly calendar in the 7th year of Cheon Il Guk). Here is True Mother’s speech:
“Today, I will change the name from the Cheongpyeong Heaven and Earth Training Center to the HJ Heaven and Earth CheonBo Training Center. The scope of this training center is not limited to the area near the town of Cheongpyeong. On the contrary, it is on a dimension that reaches the whole nation, that reaches all of heaven and earth. The significance of this training center is that it raises people of many ethnicities who can qualify for registration in CheonBo Won to become people whom Heaven will remember.”
Later, True Mother offered Heaven the triumphant result of the Seonghwa Festival Commemorating the 7th Anniversary of the Holy Ascension of Sun Myung Moon, which was held on August 19, 2019 (7.19 by the heavenly calendar in the 7th year of Cheon Il Guk), and during the Victory Celebration that she officiated, True Mother mentioned that she had upgraded the system of the administrative departments of Cheon Il Guk, the Five Wons (CheonJeong Won, CheonBeob Won, CheonUi Won, CheonJae Won, and CheonGong Won); that they would be activated gradually starting from February 2020 and that they would be administrated by True Parents. Also, True Parents combined the CheonJae Won with the CheonJeong Won and added the CheonBo Won as one of the Five Wons.
We are now in an amazing time when True Mother who is the Substantial Holy Spirit is directly officiating CheonBo Works on the earth, and True Father is working in the spirit world. True Parents told us that all blessed families on the earth should spread their blessings over the physical world, and that they must stand in the position of the ancestors throughout the past, present and future generations by liberating and blessing their ancestors in the spirit world. This is the responsibility of the heavenly tribal messiahs. True Parents will acknowledge those families as CheonBo families, and they will be recorded in CheonBo Won.
CheonBo means “heavenly treasure”. The HJ Heaven and Earth CheonBo Training Center will become a training center to nurture talented individuals who are like heavenly treasure and open the era of CheonBo centering on the value of the Blessing.