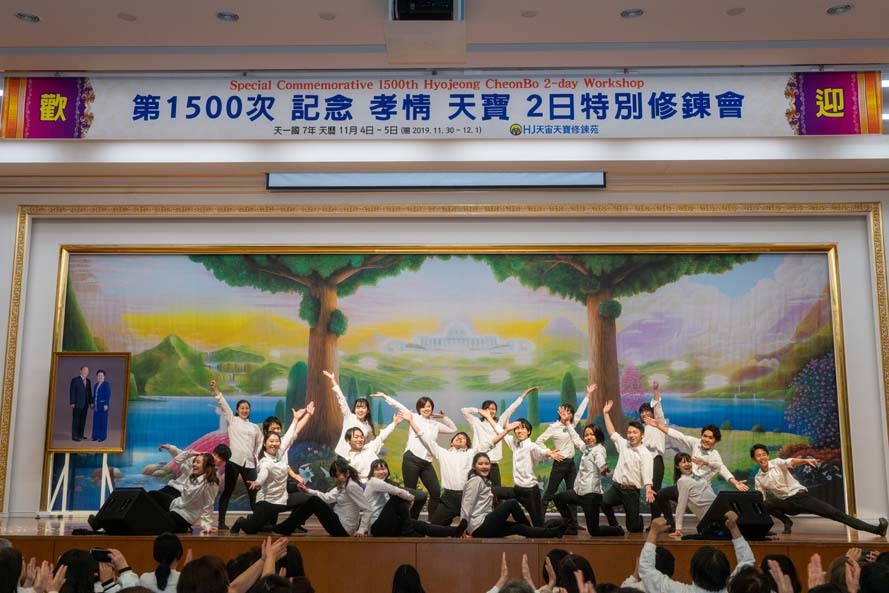 As the capital of Cheon Il Guk, the Hyojeong Cheonwon Holy Ground has been developing day by day with holy dignity and stunning beauty. Heavenly works have filled this place with jeongseong and love for 48 years and now amazing grace is being spread to the world in the new CheonBo era. After new direction came with the change of name from Cheongpyeong Heaven and Earth Training Center to HJ Heaven and Earth CheonBo Training Center, Branch Training Centers were established in four Regions—in the Heavenly Asia Pacific, Heavenly Europe and the Middle East, Heavenly Africa, and Heavenly Latin America Regions. Through the work of these Branch Training Centers, CheonBo Special Events were held throughout the world, along with many other Overseas Tours and Japanese Sub-region Tours. Also this year, the opening ceremonies for CheonBo Won revealed the splendor of this special hall where visitors can experience the stories of Daemo nim and True Mother, the heavenly tribal messiahs, the training center and True Parents’ history of restoration. New developments in the training center such as the renovated Hyojeong Café and extended Tree of Love Plaza have made the training center even more versatile, convenient and beautiful. Thanks to True Parents’ special grace, ancestors from generations 1-430 are now being reborn as absolute good spirits, and new portraits of Hyo-jin nim and Heung-jin nim have brought an even more vibrant spiritual atmosphere to the Jeongshim Won prayer hall. The two brothers now greet all the members who visit the prayer hall attired in royal robes and official hats, helping us to understand the revered positions they occupy as part of the royal family in the spirit world. We would like to bring you the top ten news stories for 2019 from the HJ Heaven and Earth CheonBo Training Center.

1. 2019 Hyojeong CheonBo Great Works Commemorating True Parents’ Birthday and the 6th Anniversary of Foundation Day (Feb. 9~11）
A total of 26,000 people from 69 countries participated in the Great Works. On the second day, a splendid Celebration of True Parents’ Birthday was held at the CheongShim Peace World Center under the theme of “Shining Rays of Hope around the World with a Filial Heart for Heaven.” The other events of the Great Works included: *Opening Prayer *Special Lecture by International President Sun-jin Moon *Celebration of True Parents’ Birthday and Hyojeong Cultural Festival *Ancestor Liberation Ceremony for generations 1–378 and Ancestor Blessing Ceremony for generations 1-329 *Fulfillment of Wishes Prayer * Special Removal of Evil Spirits through Chanyang *Holy Ground Pilgrimage for the Inheritance of Heavenly Fortune *Prayer of Gratitude for Victory. The Great Works was accompanied by a series of events held in Seoul, including the 2019 World Summit (February 7-11) to firmly open the era of a unified, Heavenly Korea, and a number of former and incumbent heads of state visited the training center.

4. 2019 Spring Hyojeong CheonBo Great Works for the Inheritance of Heavenly Fortune (May 10-12)
The total number of participants from around the world for the 3-day event was about 43,000 people from 73 countries. In accordance with True Parents’ instruction, the Tree of Love Plaza and the Hyojeong Café were newly remodeled and all the special exhibits in CheonBo Won were completed. The HJ Heaven and Earth CheonBo Training Center welcomed the participants of the Great Works from all over the world with a refreshing new look and beautiful scenery. The schedule for the first day of the Great Works included the Opening Ceremony for the renovated Tree of Plaza, the CheonBo Won Grand Opening Ceremony, and a Special Luncheon with True Parents Celebrating the Grand Opening of the Hyojeong Café. On this bright sunny day, many families had an amazing time harmonizing with each other at the Hyojeong Café, Food Plaza, and Hyojeong Family Land.
On the second day of the Great Works, the 2019 Hyojeong Offering Ceremony for the Inheritance of Heavenly Fortune was held at the newly expanded Tree of Love Plaza, officiated by True Parents. True Parents’ teachings of life show us clearly the path of victory that we should pursue through the light of a filial heart. As the fireworks lit up the evening sky, the shimjeong of the members present became one with True Parents, and it was a precious time for them to resolve to complete the victory of the heavenly tribal messiahs in spirit and truth.

6. The birth of absolute good spirits in our ancestors up to 430 generations by the special grace of True Parents
The fruit of jeongseong offered over 48 years of CheonBo Works is the redemptive works for the spirit world and physical world rooted in True Parents’ true love. In welcoming the new CheonBo era, an event that will be remembered for all eternity in the history of the providence, the Ancestor Blessing Ceremony for generations 1-430 was held, in an atmosphere of miracles. True Parents have given us special grace to be able to liberate up to 7 sets (49 generations) at a time, rather than the previous limit of only 1 set (7 generations) at once, so that all the Unification families can complete the blessing of their ancestors up to 430 generations and have their achievements recorded in CheonBo Won by Foundation Day in 2020. In accordance with True Parents’ guidance, Ancestor Liberation Ceremonies for generations 1-430 began from May of 2019. Following a period of 100 days during which the liberated spirits could complete the spirit world 100-day Workshop in preparation for the Blessing, the long-awaited Ancestor Blessing Ceremonies for generations 1-430 were held in spiritual splendor starting from October. With the strong support of our ancestors up to 430 generations who were reborn as absolute good spirits standing behind our heavenly tribal messiah activities, we were able to establish the spiritual foundation.

7. 2019 Autumn Hyojeong CheonBo Great Works (Nov. 1-3)
During the blessed season of abundant harvest, moving close to Vision 2020, the 2019 Autumn Hyojeong CheonBo Great Works was held from November 1 to 3, attended by approximately 34,000 people from 53 countries. With the renewal of the environment in the spirit world, new portraits of Hyo-jin nim and Heung-jin nim were completed and installed in the Jeongshim Won, where they now greet all the members in royal robes and official hats, suiting the roles of these two precious sons in the royal family in the spirit world. On the first day of the Great Works, a Memorial Service for Soon-ae Hong Daemo nim and Seung-eun Han Daebu nim was held to cherish the 30th anniversary of the ascension of Daemo nim who dedicated herself with a loyal heart. On the second day (Nov. 2), True Parents directly officiated a Hyojeong Offering Ceremony for the Inheritance of Heavenly Fortune at the CheongShim Peace World Center with the ACLC and KCLC pastors, an event full of miracles and great harmony. The ACLC and KCLC pastors made a pilgrimage to the HJ Heaven and Earth CheonBo Training Center and testified to True Parents. During the Grand Revival with Christian Clergy at the CheongShim Peace World Center, we witnessed the fire of the Holy Spirit burning through the assembled crowd.
The Tree of All Things Prayer, Ancestor Liberation and Blessing Ceremony for generations 1-430, and Global Hyojeong Matching Festival were held, and many participants inherited heavenly fortune and luck in the golden age of the providence that True Parents have been leading and received the amazing grace of all things. The venues of all the events in the program were full of the blessing and Works of the Substantial Holy Spirit.

10. Participants in CheonBo programs surpassed 530,000 in 2019
On November 30, the Hyojeong CheonBo 2-day Workshop made a monumental landmark with the training center’s 1,500th 2-day workshop, and a total of 51 2-day Workshops, including four Great Works were held this year, with 205,320 participants. A total of nine Hyojeong CheonBo 40-day Workshops were held with a total of 2,214 participants, including members of the 3rd generation of True Family and elder Japanese pastors. Education for the Spirit World and Physical World Blessing Ceremony has also been conducted, resulting in the creation of many couples ready to participate in the Blessing. Various other programs such as Hyojeong CheonBo Midweek Workshops and Hyojeong CheonBo 3-day Divine Principle Workshops were held at the Chinhwa Education Building B and these were attended by more than 20,000 people. In addition, throughout the course of the year, various training sessions including KTGY, JTGY, Hyojeong International 21-day Workshops, and Branch Training Centers’ events were conducted, setting a remarkable record of about 538,000 participants.