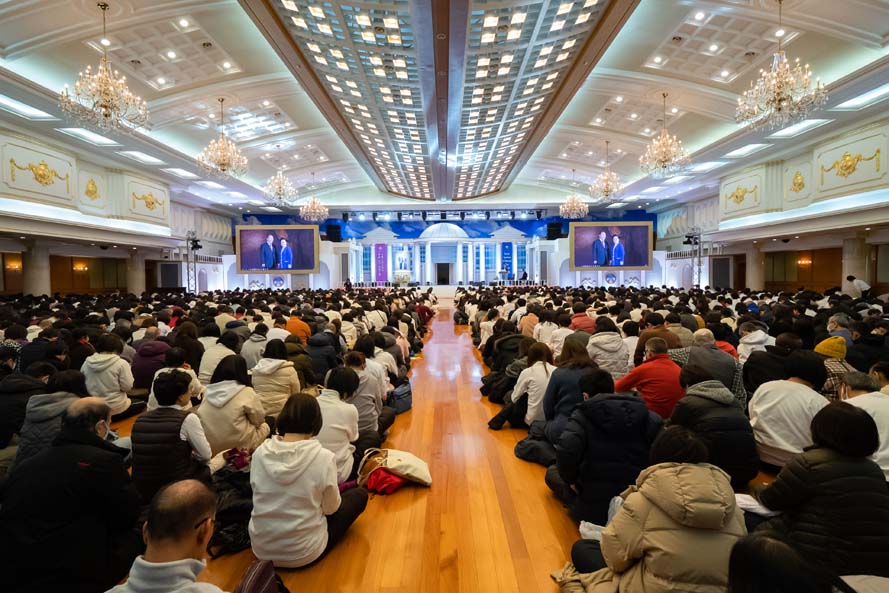 The first day (Feb. 5) of the Hyojeong Festival, FFWPU for a Heavenly Korea Family Department Director Seong-bok Hong gave a special lecture providing guidance regarding the CheonBo Holy Wine Ceremony. The guidance session began at 4:10 p.m. at the main hall of Cheonseong Wanglim Palace. Director Hong took the stage and explained the significance and special grace of CheonBo Holy Wine Ceremony and its background in the era of the firmly established Cheon Il Guk. He also read a hoondok from True Parents' benediction prayer for the dedication of CheonBo Won, revealing the vision of CheonBo Won, followed by another passage from the benediction prayer for the CheonBo Original Holy Wine. As he read through it, all the participants could feel True Parents' sincere heart wishing that all the blessed families can be registered in CheonBo Won. Director Hong also introduced the history of the ideal of creation of Heavenly Parent, and let people know about True Parents' path through much suffering to firmly establish Cheon Il Guk and the great victory achieved through True Mother's seven years of jeongseong. He entreated people to offer their sincere jeongseong more and more to fulfill the mission of becoming true families covering three generations and encouraged each of our unification members to become victors of Cheon Il Guk by making a new start on Foundation Day.

CheonBo Holy Wine Ceremony
At 2:00 p.m. and 9:00 p.m. on the second day of the Hyojeong Festival (Feb. 6) two CheonBo Holy Wine Ceremonies, historic ritual ceremonies, were held as a special grace for the blessed families attending the Hyojeong Festival who had registered for the Holy Wine Ceremony. On the last day of the festival (Feb.8) at 2:00 p.m., an additional Holy Wine Ceremony was held for those on the organizing committee of the FFWPU International Headquarters and execution committee members and staff.
Following the Celebration of True Parents’ Centenary and the 7th Anniversary of the Foundation Day of Cheon Il Guk held at CheongShim Peace World Center on the second day of the Hyojeong Festival (Feb. 6), the Korean and international members members participating in the first CheonBo Holy Wine Ceremony gathered for the ceremony in the main hall of the Cheonseong Wanglim Palace and the Tree of Love Plaza, and the CheonBo Holy Wine Ceremony for Heavenly Japanese members was conducted simultaneously at the CheongShim Peace World Center.
FFWPU International Headquarters Director Chun-gi Bae, who was in charge of hosting the event, first explained how each family should drink the Holy Wine. As one cup of Holy Wine had been distributed to each couple, first the wife drank half of the wine and then the husband drank the other half, and if there were children, they shared one cup of wine, each drinking a little of it. Following the opening remarks, the participants watched a video screening of True Mother's benediction prayer for the Original Holy Wine, which was provided by Cheon Jeong Gung as follows:

“Respected Heavenly Parent! You had a dream. You created all things in your image and finally created Adam and Eve, as the first man and woman, the first human ancestors, You waited for the day they could fulfil their responsibilities. However, that did not happen. True Parents know the circumstances under which You had no choice but to conduct the difficult course of the history of the providence of restoration through indemnity for the lengthy period of 6,000 years to find your lost children. For the first time in six thousand years, the only begotten daughter, who can complete the providence, was born in the land and the Messiah has returned as promised. The Messiah who can complete Christianity’s providence has returned, but those in the Christian sphere, prepared for True Parents are still unable to unite amidst the providence. However, because we are the True Parents and we understand your situation; we know how long you have waited. In 1960, through the Holly Wedding, True Parents began the works of rebirth and resurrection through the blessing and from this the many blessed families around the world today emerged. Furthermore, after Father’s Holy Ascension, during the seven years of providential course, the only begotten daughter, True Mother, complete the standard of national restoration promised in front of God. Thus, I began the CheonBo (heavenly treasures) works to provide a place for the blessed families in the world that have completed their responsibilities.
Heavenly Parent! How long have you waited and endured? Now you can directly embrace and govern the blessed families who have completed and have registered in CheonBo Won. Thank you Heavenly Parent for providing your protection so the many blessed families that proudly present themselves as citizens of Cheon Il Guk. For this, True Parents offer You their gratitude and the glory. Heavenly Parent! Now through the Holy Wine Ceremony, the children who have fulfilled their responsibilities can become the proud children of Heavenly Parent in the eternal world and of course, the physical world, that Heavenly Parent can embrace, as they stand among the ranks of filial children and loyal patriots. I sincerely thank you for allowing us this opportunity. Heavenly Parent! Thank you for opening the path for these children to go forward the world, going beyond the family and the tribe. They will become the Cheon Il Guk CheonBo citizens. Heavenly Parent! Remember these proud sons and daughters from around the world who are working hard to realize your long-held dream, so that we can quickly arrive at the day on which you can say, “Thank you, all has been accomplished.” Please continues to be with us as we advance toward the day when we can become blessed families registered in CheonBo Won and encourage us. I sincerely and earnestly wish for this and pray and proclaim this in the name of True Parents.”

Next, Cheonwon Church of Cheonwon Gung FFWPU International Headquarters District Leader Sang-seon Park offered a report prayer. Centering on President Gi-seong Lee, the Vice President and five Sub-regional Leaders of FFWPU for a Heavenly Korea stood on the stage for the ceremony., and the members who were not able to find a seat inside the hall gathered at Tree of Love Plaza and participated in the ceremony through a live video link.​