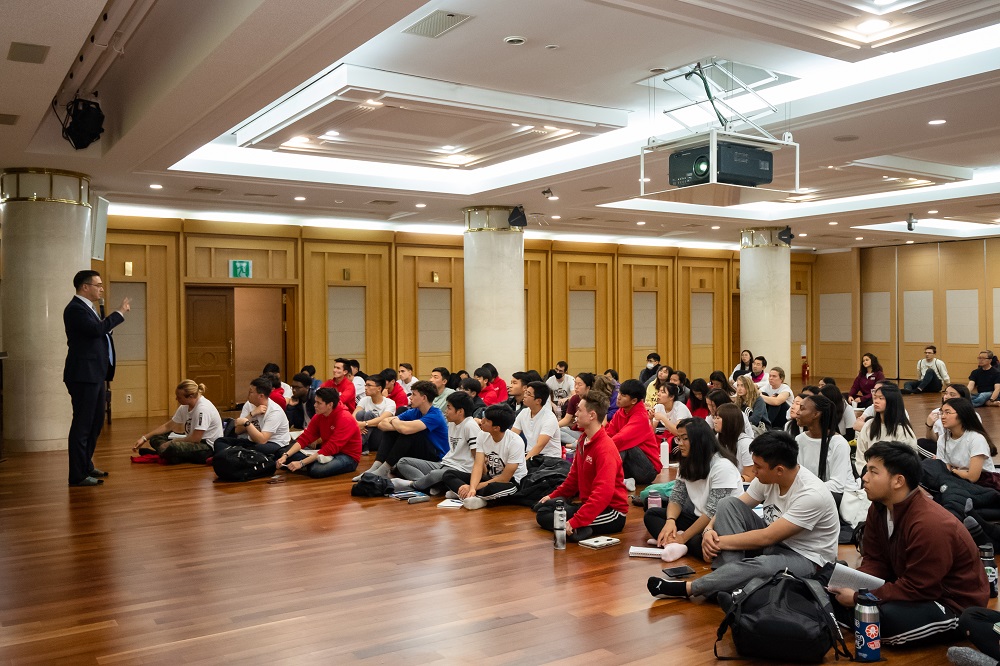 More than 120 Generation Peace Academy (GPA) participants arrived in Korea on February 2, 2020 for their two-week pilgrimage. Participants stopped by historic locations visited by co-founders of Family Federation for World Peace and Unification (FFWPU) Dr. Hak Ja Han Moon and her late husband Rev. Dr. Sun Myung Moon, affectionately referred to as True Parents, and attended key peace events spearheaded by True Mother, including True Parents’ Birthday celebration, the International Assembly of Youth Students for Peace (IAYSP), and more.
GPA began their pilgrimage on February 3 with a trip to the northernmost part of South Korea and the closest visitable location to the birthplaces of True Parents, the Demilitarized Zone (DMZ). The GPA group prayed and journaled at Imjingak, a Korean War Memorial located in the DMZ. Despite the solemn atmosphere at the memorial, participants celebrated with a heart of hope that Korea will be reunited by ringing the Liberty Bell and pinning up ribbons. GPA then had the invaluable opportunity to cross the Tong-il bridge for a quick visit to Tongilchon, a small village located only a few hundred feet from the North Korean border. 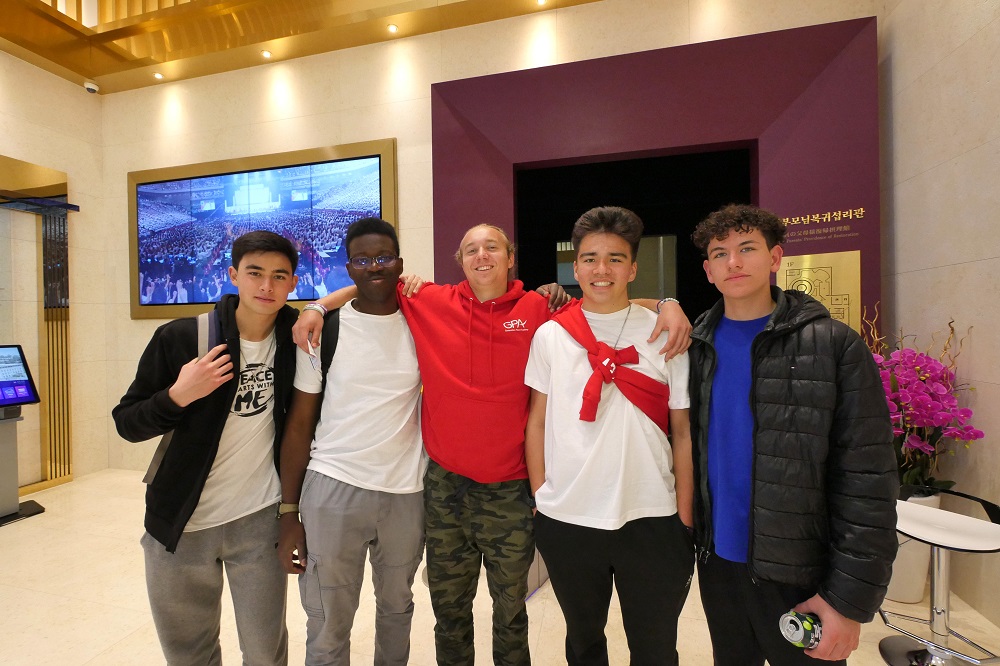 ​
Then participants retraced True Father’s historical journey as a refugee alongside Won Pil Kim and Jong Hwa Pak by bus as they made their way to Busan. “Although the scenery was breathtakingly beautiful, we could not help but feel the immense gravity that True Father felt as he climbed the surrounding mountains in travail, seeking to start God’s church,” one participant shared.
On the second day, February 4, GPA spent the morning continuing their pilgrimage and learning more about the beginning of the Unification movement at the Beomnaegol Church, the first established church center in Busan. Participants hiked up the same mountain where True Father shed blood, sweat and tears to visit the Busan holy ground and offered heartfelt prayers of gratitude. “I couldn’t help but be moved as I discovered my roots and the history of the movement,” said another young Unificationist.
The next day, GPA headed to the Korea International Exhibition Center (KINTEX) in Seoul, Korea to attend the IAYSP event. It was a great opportunity for participants to learn about the different peace initiatives started by the Youth and Students for Peace (YSP) chapters in Korea, Japan and America. True Mother delivered a powerful message where she expressed how proud she was of all the youth for their dedication to establishing peace. She encouraged everyone in the audience to continue moving forward with bright and strong determination.
On February 6, GPA participants woke up bright and early to attend the worldwide celebration of True Parents’ Centenary and 60th Holy Wedding Anniversary. An emotional musical performance depicted True Parents’ decades of work for peace, emphasizing True Mother’s continued commitment following True Father’s Holy Ascension. Many worldwide leaders also presented beautiful and meaningful sculptures and paintings to True Mother.
February 7 marked the day of the 2020 Hyojeong Cosmic Blessing Ceremony Officiated by True Parents of Heaven, Earth and Humankind. GPA witnessed thousands of couples receiving the Marriage Blessing at the CheongShim Peace World Center and celebrated the 60th Holy Wedding Anniversary of True Parents. Then, GPA represented America by performing the “Mujogeon (Unconditionally)” dance, and singing “NanJeongmal” and the American classic “Country Roads” at the Cheon Il Guk One Heart Cultural Festival.
Hundreds of Unificationists, including GPA participants, gathered on the morning of February 8 at the CheongShim Peace World Center to celebrate the week of events and honor the past seven years of True Mother’s global efforts for peace. True Mother expressed her gratitude for the past seven years and her expectations for what can be accomplished in the next seven years. Many worldwide leaders stood before True Mother and committed to establishing a peaceful world by 2027.
Later in the day, GPA traveled to the famous Yamok Church, center for early Unificationist activities, and met the groundskeeper, Jae-hwang Sung, who excitedly shared stories about the history of the Yamok Church. As participants made their way around the grounds, they were captivated by the beauty of the humble lifestyle of True Father and early Unificationists.
On February 9, the seventh day of the pilgrimage, GPA met with Special Task Force (STF) Europe to share about their respective programs. The last time such a meeting occurred was 13 years ago. “It was a really powerful experience to see each other,” said one GPA participant. “Even though we are in different programs and from different continents, we have very similar desires and goals and we connect as brothers and sisters.”
On February 15-16, GPA attended the 1510th Hyojeong CheonBo 2-day Workshop at the HJ Heaven and Earth Training Center. Before joining one of main programs of this workshop, chanyang session, there was an orientation about "CheonBo Providence and Chanyang" given by International Workshop Team Leader Ryuichi Kishimoto. One GPA participant left a testimony about chanyang, saying, “As soon as the the chanyang team started, I had a huge smile on my face showing, I became hit with the happy spirits. My whole mindset shifted and before you know it I was tearing up almost every time I heard the chanyang team screamed the next verse of the song. Just seeing their devotion, the tears that I’ve been hiding behind my eyes finally came out throughout the session. Especially at the end, when it was time to pray, I never prayed so determined and so repent-full like how I did in that prayer. It was over all and amazing experience not just for me but also the ancestors and spirits I helped liberate. I definitely was able to lighten my spirit as well, and have a better mindset after that chanyang session. (This article is referenced from FFWPU USA)